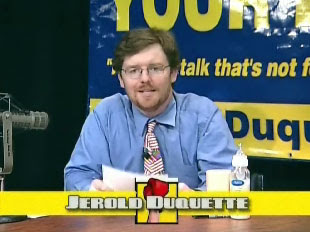 The LCTV talkshow "Put Up Your Duqs" will have an in depth interview with a representative of the Committee for Small Government, which is pushing for the repeal of the state income tax in Massachusetts.

The one hour interview IS NOW ONLNE at www.JeroldDuquette.organd will air on LCTV Channel 12 starting Monday, October 13th at 6pm.

Leonard Cooperman, representing the Committee on Small Government, provided a thoughtful, if debatable, rational for the ballot measure.

An interview with opponents of the income tax repeal measure will be appearing on the show in the next couple of weeks. More information will be distributed on that interview as soon as it is "in the can," so to speak.
Posted by Jerold Duquette at 4:46 PM

Just viewed the video and it is clear that they do not have a plan for the generation or replacement of revenue. Nor was he able to articulate the cuts that should be made other than the salary of toll workers!

In addition, he mentioned that he does not have access to the budget when in fact there is a link to the state budget on his ballot question website.

Ballot Question One is a reckless question and it is in the best interest of all residents to vote NO.