Vote No on Question 1

Take the time to read the four questions for the upcoming election day ballot on November 4. A number of posters to the LongmeadowBuzz blog have urged voters to vote NO on Question 1.

A YES vote on Question #1 would reduce the state personal income tax rate to 2.65% for the tax year beginning on January 1, 2009 and would eliminate the tax for all years beginning after January 1, 2010. A NO vote would make no change in state income tax laws.
Given today's financial uncertainties, a YES vote on Question #1 might seem to be attractive to some people but the impact on cities and towns would be devastating. A group called "The Coalition for our Communities" has generated some numbers to help voters assess the financial impact and the results are shown below: 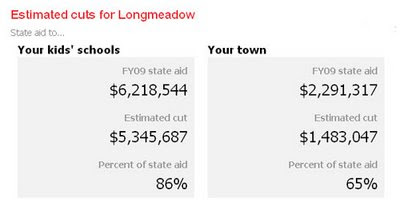 Here is a link to "The Coalition for our Communities" website which provides more information including the methodology used to generate the numbers.
In order to avoid major financial chaos for Massachusetts cities and towns, please vote NO on Question 1.
Posted by Jim Moran, LongmeadowBiz at 8:10 PM