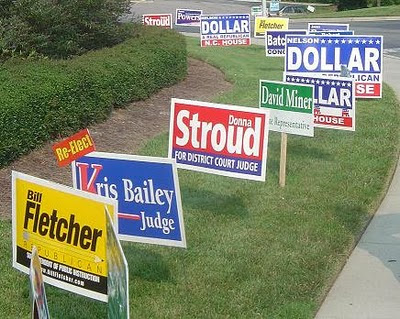 I will never understand why folks get upset about political lawn signs. The fact is POLITICS is IMPORTANT and lawn signs create opportunities to talk about politics. The widespread, but very wrongheaded notion that politics isn't "family friendly" or that it's just a bunch of pols begging for votes is part of the reason Americans know less about their government and political system than any other industrialized country.

The more signs the better! it's not just a right, it should be part of our responsibility as citizens to encourage and celebrate political participation.

I guess that I am not surprised that you commented on my post... given your past notoriety with campaign signs in Longmeadow :-)

My point was to establish a rational limit for lawn signs in this upcoming election season that is likely to get very heated.

It is clearly more important for each individual voter to learn about the candidates and the issues rather than vote based upon his neighbor's choice or some informal lawn sign count.

Sadly, though I know you are being playful, some folks really would call me "notorious" for my spririted defense of the Constitution and the role of politics on the town green. If these folks understood the purpose and placement of that very spot by our town's founders, maybe they would have a greater appreciation for the positive role of politics in community life.

By the same token, I do have to allow for those among my critics whose objection is to my style, not my message. To them I can only apologize.

True, but if the law states that signs cannot be displayed more than 60 days before an election, then so be it. We live in America and a great town, one should be allowed to express their personal freedom!!!