Citizens for A Better Longmeadow

is the name of the group led by Roger Wojcik that organized a “public” forum that was attended by an overflow crowd of ~ 65-70 people last night at Storrs Library. The meeting objective as outlined at the outset by Mr. Wojcik was to provide some factual information about the financial issues facing the town both today and into the future. This group believes that many town residents need additional information to make informed decisions at the upcoming town meetings on May 11 and May 25 as well as town elections on June 8. Mr. Wojcik asked attendees to be respectful to each other and not have a repeat of the April 12 forum. 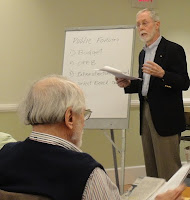 First of all, I applaud Mr. Wojcik’s attempt to provide some factual information about town finances including both the town’s annual operating and capital budgets as well as some of the other current liabilities such as Other Post Employment Benefits (OPEB). In addition to being a member of the town’s Finance Committee and a past member of the Capital Planning Committee, Mr. Wojcik has useful workplace experience in developing and managing corporate budgets. During the meeting Mr. Wojcik was criticized a number of times by some attendees, particularly about the accuracy of a $35 million OPEB future liability but he pointed to an official town analysis by Scanlon & Associates as his source. Similar objections were voiced about a report on town infrastructure problems and there were attempts by some attendees to discredit this information as well. 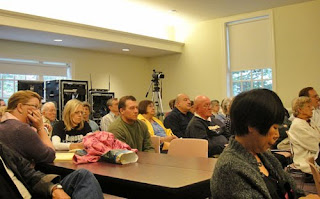 Other than one flamboyant outburst by a well-known town resident and regular poster on this blog, the meeting proceeded with a reasonable decorum- far better than the previous forum on April 12 (see my previous post)…. that is, until Mr. Wojcik turned the meeting from an information session into a political debate about Select Board candidates for the upcoming election and the inadvisability of electing former/ current School Committee members to the Select Board. What followed was not unexpected from my vantage point given the makeup of the audience.... the meeting turned into a similar “shouting match” situation as did the April 12 forum and the meeting ended on a very sour note….

Regarding Mr. Duquette’s latest post here on the Buzz blog…

I have listened and attended numerous Select Board/ School Committee meetings as well as official public forums on the current school/town budgets and high school building project during the past 9 months. I believe that I understand the situation quite well and have become very concerned about where we are headed.

“The library is an operating expense, while the new high school is a capital expense. Closing the library doesn’t do anything to advance the high school project.”

He also states that Mr. Wojcik would have “earned a poor grade in my public budgeting course”. During the meeting Mr. Duquette also restated his recurring theme that “you can’t run public government like a business”.

As Mr. Wojcik tried to explain at last night’s meeting, a capital expenditure turns immediately into an line item operating expense through annual repayment of interest + principal. For the proposed high school project this operating budget line item is likely to be ~ $3.5 – 4.0 million in FY2014 (based upon estimates by Paul Pasterczyk- Town Finance Director but actual numbers are dependent upon municipal bond interest rates). (See my recent post to determine individual property tax impact.)

Mr. Duquette’s approach is similar to many new HS school building advocates who have simply decided to ignore or discount or discredit mention of the any other financial needs of the town and want to simply move forward and build the new high school. They do not want to discuss the financial ability of Longmeadow’s town residents to support such a project.

I believe that we are making a mistake if we simply choose to ignore Longmeadow’s other financial issues as we debate the decision to build a new high school. Given our difficulties in formulating the FY11 budget, it is clear that we will be making additional difficult choices in the very near future… not necessarily ones that we want to make but ones that we are forced to make. These unpopular choices may include reductions in teachers, fire dept/ police dept staff, additional curtailment of library services ……
Our town leaders need to BALANCE available financial resources to deliver both school and town services so that all segments of our town population are treated fairly. With two seats (out of 5) on the Longmeadow Select Board being decided at the June 8 election, it is important for town voters to fully understand each candidate’s position on this issue so that they can make right choices.
Posted by Jim Moran, LongmeadowBiz at 2:23 PM

You may not have done any better in my public budgeting course. You write, "As Mr. Wojcik tried to explain at last night’s meeting, a capital expenditure turns immediately into an line item operating expense through annual repayment of interest + principal. For the proposed high school project this operating budget line item is likely to be ~ $3.5 – 4.0 million in FY2014"

This is a wonderful example of the difference between accuracy and precision. The fact that capital financing payments are made and budgeted annually DOES NOT MAKE THEM SUBJECT TO THE SAME BUDGETARY CONSIDERATIONS AS OPERATING COSTS! Im reminded of the Tea Baggers I met in Hartford last week who informed me that Obama was Nasi and a Socialist, a fact made clear by the appearance of the word "Socialist" in Nasi.

This is a classic example of reverse engineering. Rojer starts with his perferred conclusions and then constructs a set of "facts" just slightly out of context, to create unwarranted confusion for some and unwarranted certainty for others.

Debt service is a line item in our town's "operating budget". For the SB approved FY11 budget, this number is $1.52 million and it comes from the $14 million dollars of outstanding Longmeadow debt obligations that Roger mentioned at last night's meeting. If the school project is approved, this "operating" budget line item will increase by ~ $3.5-4.0 million. Those are the facts... if you are interested, you can find the debt service line item in the town warrant.

I had a difficult time understanding the rest of your comments and their relevance to my posting.

I think that I would appeal my low grade to the dean of students ;-)

Your are restating factually accurate things, but factually accurate things unrelated to both Roger's purpose and mine. He was pretending that these facts are alarming AND that they related directly to SC/SB efforts to CLOSE the library INORDER TO PAY for the new HS. He wanted the audience to believe that some wanted to close the library to save money for the new school. That's why he did not want to clarify between op and cap budgets.

Roger's entire presentation was a recitation of "facts" and accompanying "worst case scenario" projections. My own questions revealed that he didn't even read the report he was citing. How could he NOT KNOW if his $35million figure took into account past patterns and future projections of how many employees choose Medicare? He also said ABSOLUTELY NOTHING about the myriad of potential strategies/ scenarios/etc do deal with a situation he wants you to believe is out of control. If he's right,then nearly every city and town in N.E. is in the same boat and had better stop building anything.

Simple comparative analysis would expose the very narrow and politically motivated nature of his presentation Jim. In reality he was using out of context truths and projections to paint a picture that not only would scare folks from supportinig the HS project, but if reasonable, would scare them from supporting ANY investments in our town.

This type of cynical political ploy would be bad enough from a citizen writing a LTE, but from a group holding a "public Forum" to ostensibly provide "information" to voters it is UNACCEPTABLE and I will not stand idlely by while these fellas try to exploit the fear, uncertainty, and confusion of vulnerable Longmeadow residents, as well as the dedicated attention to "facts" of people like you, who he has apparently convinced to focus on the trees, on the bark even, without ever stepping back to see the forest.

Public finance and political rhetoric are basically what I do Jim and my commitment to quality education is not incompatible with the town's wellbeing. The support of fiscal conservatives like Rob Astletine should be a crystal clear political signal that the project makes fiscal sense. Not only is Rob to the right of just about everyone, he's also an extremely talented researcher and number cruncher.

These concerned citizens simply lost the rational debate and now they want to enlist low information voters in an effort todiscredit that debate.