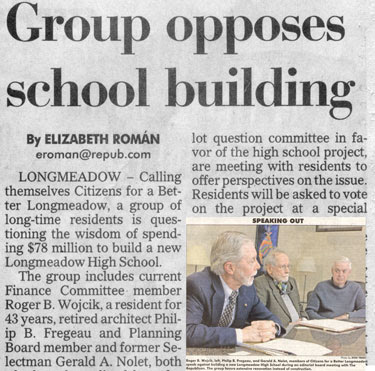 The group calling themselves “Citizens for a Better Longmeadow” voiced their concern to the Springfield Republican editorial board about the wisdom of spending $78 million building a new high school given the significant financial difficulties that are ahead for the town of Longmeadow. They believe a more “fiscally responsible” and lower cost renovation project would be in the best interest of the town. This group- led by Roger Wojcik, Philip Fregeau and Gerald Nolet have been holding “public forums” to express their concerns.

Their next forum is scheduled for Tuesday, April 27 at 6:30 PM at the Storrs Library/ The Betty Low Room.

Hopefully, the discussion will be more reflective of our town’s character and not resemble the last public forum on April 12 about which I wrote a Buzz posting that was largely a shouting match between the opposing sides in this debate.
Posted by Jim Moran, LongmeadowBiz at 6:24 PM