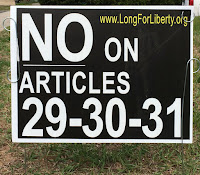 I am licensed to carry a firearm. I am a retired police officer, I am the National Training Manager for an international company. My wife is a mother, and grandmother who is also licensed to carry.

We have been fingerprinted, had our backgrounds investigated, and taken firearms safety courses. We have purchased gun locks, and gun safes and comply with all of Massachusetts laws that are among the toughest in the nation.

Now Alex Grant proposes more rules will make the public safer? I think not. We have complied with every hurdle we have had to to now have the threat of these new laws making us criminals? It should not be a secret that the criminals who use their firearms in the commission of crimes will not pay attention to town ordinances.

This onerous law will identify the families in town that DO NOT own firearms, as well as those that do. Would any of you post a sign in from of your home that says "We do not have a firearm?" If this law passes you will have that sign effectively.

Criminals prefer "gun free" zones- it makes a safer working environment for them.

I leave law enforcement to the professionals, our Police Department. I carry a firearm for self defense.