Another town resident speaks out about Articles 29-31

This letter was submitted to Longmeadow Buzz by Longmeadow resident Mary K. Lewonchukis in reference to the recent letter posted by Alex Grant in the Reminder, and in reference to his previous letters posted in various town publications, as well as his televised appearances.

My biggest reaction to the Reminder letter is one of disgust.  I am disgusted that Mr. Grant is using the tragedy at Sandy Hook to further his poorly drafted and ineffective legislation.  He continually references the Sandy Hook tragedy and the children’s deaths to his proposed Articles, and he is clearly comparing Longmeadow to Newtown.  At the end of this article he then states “…all the “No” vote offers is a shrug of the shoulders and lockdown drills for our kids.”  Well, this letter will address each of the points he makes so that no Longmeadow resident thinks my “No” vote is simply a shrug of my shoulders to the Newtown tragedy. 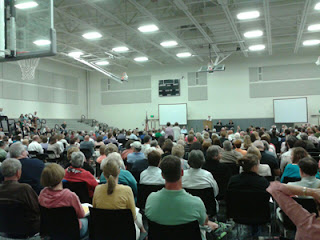 The first Article drafted by Mr. Grant will not allow a licensed Massachusetts resident to carry a gun in any town building or on any property owned by the town, without facing a fine.  Please be aware that there are already laws prohibiting possession of a firearm in the schools.  This Article has nothing to do with Sandy Hook or Newtown, and would not have prevented that tragedy.  Adam Lanza had some serious mental health issues, and he would have completely disregarded any law that did not allow him to carry.  This Article is drafted to keep law abiding residents from carrying guns – it will have no effect on any person who is unlawfully carrying a gun, or has ill intent.  Criminals and people with mental health issues that intend to do harm just don’t care what the town laws say.  All this does is keep a licensed, trained firearm holder from perhaps stopping a person who intends to do harm.  A much better alternative is to have armed police officers or retired law enforcement present in the schools.  That would have stopped Adam Lanza.

The second Article drafted by Mr. Grant would require any person renewing their state issued gun license to give to the local police department a list of firearms, rifles, or shotguns possessed by the applicant, and require applicants to certify their compliance with an already existing state law that requires their firearms to be secured in a locked container.  This Article would also not have stopped the Sandy Hook shooting in any way.  The firearms located in the Lanza household were already required to be locked, but Adam Lanza had access to the combinations to the safes the guns were stored in.  Every time a firearm is purchased in Massachusetts a background check is performed and the gun is registered with the Commonwealth of Massachusetts.  Any listing given to a local police department is subject to a Freedom of Information Act request, can be obtained by any newspaper, and can then be published (this was done in Westchester County New York).  This listing gives criminals a blueprint for houses to target to steal firearms and houses to target that do not have any firearms.

The third Article drafted by Mr. Grant would ban all assault weapons and large capacity feeding devices manufactured prior to September 13, 1994 in Longmeadow.  Adam Lanza did not carry out the shooting at Sandy Hook with an assault rifle manufactured prior to September 13, 1994, so this Article would also not prevent a tragedy like Sandy Hook.  The first thing that Mr. Grant should clarify is that I cannot purchase an “assault rifle” such as you see in movies used by the military.  I cannot purchase a rifle that is “automatic” – such as an Uzi or machine gun.  I think there is a misconception out in the minds of residents of Longmeadow that gun owners in town have these guns that can shoot hundreds of rounds a minute.   Generally speaking, these guns can be purchased by terrorists or criminals outside of the boundaries of any law, but a law-abiding citizen cannot purchase or possess these guns and magazines.

None of the Articles Mr. Grant proposes would have stopped the violence at Sandy Hook, and I find it extremely offensive that he is using that tragedy to promote his agenda.  I have a child in the Longmeadow school system, and it is my worst nightmare that a mass shooting will occur in Longmeadow.  That is every parent’s nightmare, and Mr. Grant is playing on these fears to get his legislation passed.  Mr. Grant says the “No” votes have no answers to reducing Longmeadow’s risk of mass shootings and ordinary shootings.  He then goes on to cite Virginia Tech, Columbine, and San Bernardino as examples.  Sandy Hook, Columbine and Virginia Tech could have been prevented with stronger responses and requirements for people with mental health issues, especially those with access to firearms.  San Bernardino was a mass shooting by terrorists – and Mr. Grant is proposing to restrict residents from protecting themselves, their families, and their community against terrorism.  Terrorists have never been concerned with local, state or federal laws, and Mr. Grant’s Articles would most certainly not deter them at all.  Mr. Grant’s third Article would leave our community completely exposed to terrorism at a time when ISIS has indicated increased attacks against the United States.

The guns are not a problem in Longmeadow, and never have been.  Should these Articles be passed, there is no doubt in my mind that the Town will be sued, either by a resident of Longmeadow, or someone who is passing through the town and is fined for possessing a legally owned firearm.  The town will also face increased costs to enforce these Articles and make the police focus shift from the really important issues faced by the town to enforcement of these non-existing issues.  The town will also lose any lawsuit – and anyone who doubts this only needs to google “McDonald versus City of Chicago”.  This case struck down two restrictive handgun laws in Chicago and Oak Park, Illinois.  The Supreme Court of the United States determined that the Second Amendment applies to individual states.  The Supreme Court held that the right of an individual to keep and bear arms applies to the states.  The cost to the City of Chicago was over $3,000,000.

As residents of Longmeadow, we would be much better off focusing our attention and budget on the things that are really needed in town, such as the DPW project, new middle school funding, or the Senior Center.  I urge all Longmeadow residents to vote no to the Articles proposed by Alex Grant that will do nothing to further protect our town or children, and will be extremely costly to our town.

Posted by Jim Moran, LongmeadowBiz at 11:30 AM

Damn straight! You nailed it, Mary!

I feel like there at least needs to be a police officer in the school (like there used to be) with a firearm secured to him in the event that something were to happen. Due to conflicting liberal and conservative viewpoints on gun control, this whole dispute on gun regulation in a town as conservative as longmeadow will most likely never reach a full compromise that everyone is satisfied with