Another Town Resident Expresses His Concerns About Articles 29-31 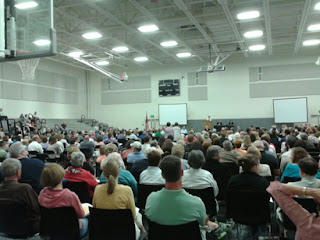 All three articles are unnecessary and essentially are a non-solution to a non-problem. To my knowledge, Longmeadow has not had and does not now have any gun crime. Article 29 seeks to ban all firearms from any building owned by the town or on any grounds owned by the town. This article was so poorly drafted that it would prohibit all law enforcement personnel from having a firearm anywhere on town property. It is already illegal to have firearms in schools and this article would ban law-abiding gun owners from bringing any firearm past their own driveway.

Article 30 requires all owners of firearms to register their firearms with the police department when they renew their firearms license. This is redundant because all firearms are now registered with the Commonwealth of Massachusetts and the police have access to that information. This would take valuable police personnel time and valuable town resources to put in place again what is already in place.

Article 31 would seek to ban “assault weapons” or “large capacity feeding devices”. This law also contains no exemption for law enforcement personnel. The law refers to the Massachusetts definition of an assault weapon. If one is already legal in Massachusetts with either of the two items , why would there now be a need to make either illegal in Longmeadow?

So anyone outside of Longmeadow could own one but not anyone who resides in Longmeadow.
The implementation of these articles are not only unnecessary and redundant but are very divisive and will be very costly to the Town of Longmeadow. Not only will there be a cost to implement these articles but there will be legal challenges to their implementation which could run into the hundreds of thousands of dollars. I would suggest that a better use of town funds would be the creation of programs to help stem the tide of the current opiod epidemic which is harming our young people.