In order for this blog to be an effective form of interactive communication for Longmeadow residents there is a need for people to contribute both new subjects and to make comments about existing subjects. To do either will require a "Google account".

There are no devious intentions with our Google account requirement.  We will not be using any means to identify the real names of forum posters. Requiring a Google account to add comments provides some degree of authenication so that the forum cannot be easily sabotaged. This forum will allow anonymous postings of comments using the Google screen name that you select. In addition, all comments will be moderated... that is, screened for irrelevant or obnoxious content before they are posted.

Requiring a Google account will also allow us to conduct polls without easy opportunities for sabatoge. For example, once you vote on a poll question, you cannot vote a second time. You can however change your vote.

LongmeadowBuzz is also interested in new subject ideas as well as suggestions as to how it can improve this forum. If you encounter any problems, send an email to: LongmeadowBuzz@comcast.net  and we will try to provide some assistance.

Go create a Google account and participate on LongmeadowBuzz.
Posted by Jim Moran, LongmeadowBiz at 11:53 AM No comments:

As we move in the general direction of Spring, and out of the shadows of Winter, it might be worthwhile to give some thought to the upcoming Town Elections.

There will be three seats on the School Committee that will be up for election.

Geoffrey Weigand, an incumbent, is considering running for re-election.

Jerold Duquette, an incumbent, is not going to run for re-election.

Janine Idelson, an appointed incumbent, is not going to run for re-election.

50 signatures on a nomination paper are enough to get you access to the ballot. Papers can be picked up at the Town Clerk's office and they are due back by the 21st of March.

In view of the fact that the budget for the schools is the largest part of the town budget, it would seem appropriate for a number of people to step forward to serve on this important committee.

With at least two seats open on the School Committee and one seat available for election on the Select Board, voters of the Town of Longmeadow have an opportunity to significantly shape the future policy direction of the town.

The first step in this process is the recruitment of candidates for public office.

Hopefully, this brief essay will encourage citizens to consider moving from spectators to participants in our political processes.
draft
3:31:00 PM by Teacher
Delete
1 – 1 of 1
Posted by John J. Fitzgerald at 4:08 PM No comments:

With all of the Select Board changes in water/ sewer rates for the 1st bill FY08 (July-Dec 2007) most of us are at least a little confused or unsure as to how much relief we will be receiving in the mail in the form of "abatement" or rebate checks.

I have prepared a chart using the best available information to help individuals. Remember this is an unofficial calculation and not approved numbers from SelectBoard office or Longmeadow Finance Dept. As was highlighted in my last posting, water rebates are already approved while the proposed sewer rebates must be approved at the March 4 Special Town Meeting. The chart below assumes that the sewer rebate will be approved by the STM. 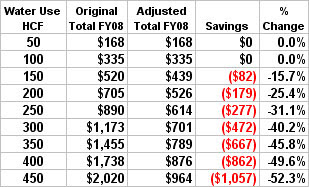 Results from this analysis shows that low volume users (up to 100 HCF) will not receive a rebate check while high volume water users (> 250 HCF) will receive rebates of 31-52%.

Below is a chart that compares FY07 charges vs. FY08 (adjusted) charges. 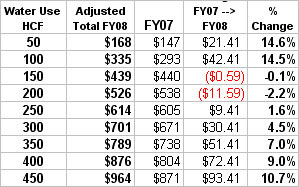 If interested there is a copy of the full spreadsheet used for this analysis posted on LongmeadowBiz.com.

Don't forget to vote in our poll about water rebates (--> top right hand corner)!
Posted by Jim Moran, LongmeadowBiz at 11:42 AM No comments: