The Rapidly Increasing Cost of Trash in Longmeadow

Mark Gold, Longmeadow Select Board member shares some background cost information about Longmeadow's trash program and the reasons for the implementation of the new standardized 35 gallon containers. 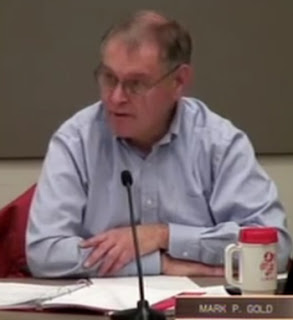 There’s been a lot of discussion about Longmeadow’s new trash containers, and I want to respond to those who are unhappy with the decision to implement these 35 gallon containers.  I hope you’ll come away from this with an understanding, if not agreement, that our growing costs of trash disposal was something that had to be implemented.

First, some background:  The cost of disposing of Longmeadow’s trash has three components:
The sanitation budget also has revenue of $ 285,000 from dumping fees, bag sales, and the sale of recycling goods (both curb-side and bulk recycling from the recycling center).  Actual curb-side recycling brings in about 10% of this total.  Although the curb-side recycling doesn’t result in a lot of income it does avoid the $75 per ton of disposal costs.  Despite what you might have read about the weakened global market for recycled goods, in Longmeadow, recycling still pays.

The information presented above is to provide background to the trash container decision. The 33% (over three years) increase in the cost of trash disposal is the highest increase of any component in the Town’s $65 million budget. Not only is the cost per pound of trash that we dispose of going up each year, but the total number of pounds of trash has also been increasing, and the amount of material we’ve been recycling has been decreasing.  Trash disposal quantities were up 5% in FY 2019 over FY 2108  (3598 tons vs. 3403 tons) and are up another 6% for the first three months of this year vs. the 2019 numbers.  At the same time, recycling quantities are down.  Paper and cardboard recycling is down 10 tons in 2018 compared to 2017 and glass/plastic recycling was down 2% in 2018 vs. 2017 and another 4% in 2019. 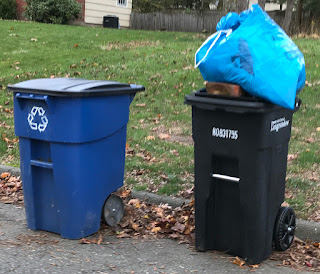 Our recycling commission identified that there are numerous town residents that have been routinely exceeding the 35-gallon weekly disposal cap that has been in place for over 10 years.  There were several alternatives considered to bring our trash disposal costs into compliance with existing by-law limitations.  Most of the alternatives had a “trash enforcement” patrol in one form or another, and that just isn’t practical.  Our trash haulers haven’t the time to be the enforcement group and it’s not appropriate for the police to be enforcing trash regulations.  So, in order to address the rising cost of trash disposal, the recycling commission proposed the town pursue a State of Massachusetts grants to underwrite the cost of purchasing uniform trash containers for all residents.  That grant required the contaners be 35 gallons in size.  It’s the wave of the future.  These 35-gallon containers will simultaneously limit the amount of trash that is disposed and encourage increased recycling.

One complaint I heard is that Springfield residents get a 55-gallon container.  But Springfield residents also get charged a $90 per year supplemental trash fee.  As a Select Board member, I felt it was more equitable to provide a uniform 35-gallon container to every household than impose a trash fee on everyone in town.  $90 per year will buy a lot of supplemental blue bags for those who dispose more than 35-gallons of trash in a week.

So I ask that you give the new containers a try.  The regulations on disposal haven’t changed, we’re just making it difficult for households to exceed that 35-gallon per week limit.  We’re going to be evaluating the impact of these on our disposal costs and recycling tonnage.  Based on the implementation of uniform containers in other communities, we expect this to provide the cost control for this part of our budget that’s essential for every line item.