This opinion column was submitted to the LongmeadowBuzz blog by Alex Grant, a Longmeadow town resident. 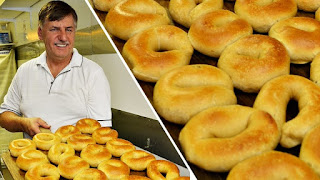 Mom, apple pie, fresh air, the family farm, and the small business owner.  We pay homage to all these things.  They are America.  They are unassailable.  Everyone is for them, and nobody is against.  That is what we say at every kitchen table and every rostrum.

With such widespread support, it is hard to imagine how a family farm, or a small business that is beloved in the community, could ever fail.  But it happens all the time.  Sometimes we honor the idea of something more than the thing itself.

And so it goes with what appears to be the final chapter of Alex’s Bagels at the Big Y shopping center.  With the end of Sam and Chippy’s barber shop, the departure of Brightwood Hardware, and the impending eviction of Alex’s, it should be clear that being a landlord to small businesses is no longer part of Big Y’s plans.  For a while, Big Y had a business plan that involved running a medium-sized grocery store and collecting rent on space that it figured it could not use as profitably.

With that business decision came reliance, reliance by the small business owners and reliance by the residents of Longmeadow.  Big Y, of course, never promised to lease this space in perpetuity, but to the community it certainly seemed that it had.

The bagel shop harks back to the 1960s and 1970s, operating though three owners, each linked to the one before.  Alex might have set a world record for the longest bagel apprenticeship by working there for 19 years before taking over as owner 10 years ago.  Brightwood Hardware was there for over 50 years.  In the barber shop, you could hear tales from the 1950s as Chippy clipped your hair.

The men and women of these businesses not only rented space from a corporate landlord, they devoted the best years of their working lives to serving the residents of Longmeadow.  Making that choice meant making investments in equipment, investments in building up a clientele, investments that only made sense if the business was a long-term proposition.  That choice was a leap of faith that their loyalty to their landlord and to the community would be reciprocated.  And for two generations it was.

They carved out niches for themselves, none more so than Alex and his predecessors.  Even today, it is a rare skill to make a real, fresh bagel that has a firm outside and a soft inside.  Dunkin Donuts, Starbucks, bagel chain restaurants, and grocery stores have all tried and failed to deliver a real, New York City style bagel like Alex’s. In their pursuit to make bagels that can be made, preserved, and distributed, these corporate bakers have rendered circular bread rolls.  The work of making a traditional bagel, it seems, requires the daily toil of baking in small batches and selling the bagels not long after they emerge from the oven.

From Big Y’s corporate boardroom, all of this may seem like small potatoes.  The names of Mo, Chippy, Kimmel, Phil Grant (no relation), and Alex may mean nothing at that level.  Alex’s children who have worked there and all the other teenagers and young adults who have worked the counter and have learned the craft of bagel-making may seem remote to the important business of wringing out another percentage point of earnings growth.  But to many people in Longmeadow, the vast majority of whom walk the aisles of Big Y, these people, these families, and the work they do are part of our town.

Justice Oliver Wendell Holmes once said that “Man, like a tree in the cleft of a rock, gradually shapes his roots to his surroundings, and when the roots have grown to a certain size, can't be displaced without cutting at his life.”  After more than two generations, Longmeadow has shaped its roots around the bagel shop and its erstwhile neighbors.  Big Y needs to reckon with the loss of goodwill that will result from displacing Alex’s shop.

While I was on the Select Board, corporate landlords were all too happy to carry the banner of the small businessperson when it came time to consider the commercial tax rate for their properties.  Big Y and others touted the value of locally-owned small businesses like one would promote the value of motherhood, the Olympic spirit, and the United States of America.  Now Alex’s shop is an inconvenience to a larger corporate aim.  It is time for Longmeadow residents to make this eviction an even larger inconvenience for Big Y.

Alex J. Grant is a lawyer living in Longmeadow.  His email address is alex.grant68@yahoo.com .

Posted by Jim Moran, LongmeadowBiz at 1:19 PM No comments: