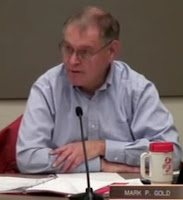 The following letter was shared by Select Board member, Mark Gold who wanted to provide some insight as to how financial decisions are being made for the town.

I appreciate your note, and your taking the time to write to the Select Board members.  I think it's important for residents to understand the basis for my concerns about the addition of two more pickleball courts to the design of the Longmeadow Adult Center, concerns that are neither an attack on seniors (I am one) nor on the need for additional recreational activities in town for seniors, but rather one of scope creep and funding process.  The basis for my concern is as follows:

The town was advised of a design for the Adult Center - along with ancillary facilities.  Based on that design (and some of the seniors were the most adamant that we stick to the design as presented at town meeting), the town appropriated funds to build that facility.  The design that was offered and agreed upon DID NOT have four pickleball courts.  I understand that there is a group of people in town who, like you, believe we need additional pickleball courts, but what they need to understand is that the elected and appointed officials in town are also hearing from others who want more (pick one): baseball fields, tennis courts, softball fields, soccer fields and two new schools (not to mention Library facilities, road repairs, sidewalk repairs and the like).  Funding is limited and the fact that there may be contingency funds left over in the Adult Center project does not approve those funds to be spent on pickleball courts, or in fact, to be spent at all. Who's to say that other groups don't believe we should construct an outdoor bocce ball court or shuffleboard court or any one of a number of outdoor recreational activities using unspent "contingency" funds?  My fiduciary responsibility is to assure that the building as designed gets built for the lowest price in the highest quality manner, and contingency funds are specifically for that use - to assure we can build what we said we would - no less, but also no more.  The offer of the "Friends of the Adult Center" to assist in the capital costs of these pickleball courts cannot influence me in conducting my fiduciary responsibility to the 11,000 voters in Longmeadow who approved financing for a very specific design of the Adult Center.


If the need for additional pickleball courts is as critical as stated, their construction will be vetted and prioritized against other needs in town.  Funding for recreational facilities is available through the Community Preservation fund as well as our Capital Planning process.  Even the town Building Committee has recognized that they currently have a "one bid" price for construction of these courts that includes several project related percentage add-ons for the General Contractor and the Owner's Project Manager.  One should also note that state law (chapter 30B) requires competitive bidding on projects such as two additional pickleball courts - something that is clearly NOT integral to the construction and opening of the Adult Center as proposed and funded by town meeting.  One of the letters I received in support of the additional pickleball courts was written by a resident of Enfield - asking us to spend our money on facilities they benefit from.

I do not want to leave you with the impression that my opposition to these courts at this time is hiding behind "process".  My concern is for scope creep and funding items that did not, and may not, have the support of those who are paying the bill.  I strongly support providing facilities in town for everyone to be able to exercise in the way that meets their needs, but I'll continue to watch the dollars that the town voters have entrusted us with to build the adult center they were promised.

Ken Taylor- Candidate for Re-election to the Longmeadow Planning Board 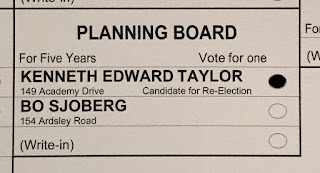 I am Ken Taylor and am running for re-election to the Longmeadow Planning Board.  I have been a town resident for 52 years and both of my children have graduated from the town school system.  I am a graduate Engineer from the WNEC University and am a licensed Professional Engineer in the state of Massachusetts.  In my work career I was a Project Engineer and Forensic Metallurgist.
I served on the Water and Sewer Commission for 21 years prior to the town changing to Town Manager style.

I have served on the Planning Board for 13 years.  I love Longmeadow and am aware of the need to provide guidance to the natural, historic and cultural resources.  Since I moved here, I have seen Longmeadow change from a town with open fields to one which is fully developed.

The most important issue facing the town is the proposed Gas Pumping / Metering station on the Longmeadow Country Club grounds.  The Planning Board has had many public meetings resulting in a series of by-laws that will hopefully stop the installation.  Another issue will be town finances.  The current tax base cannot support all the services the residents want.  Any new developments that could provide more tax revenues will come before the Planning Board.  Other issues will be the Water Tower property, the former Christian Science Church redevelopment, the re-use of the former Synagogue on Williams Street, the possible consolidation of the Middle School and the use of those properties.

The recent accomplishments of the Planning Board are the Brewer-Young Mansion zone change and commercial development, the Dwight Road Medical project, the Willie Ross School expansion, the Pride gas station development, and the Longmeadow Shops expansion.

By definition the Planning Board has the responsibility to guide the development of the Town in the best interest of all its residents. The Planning Board plays an important role in developing the visions for future growth and preservation of the community by listening to the public for opinions and comments concerning the welfare and appearance of the town’s residential appeal and formulating rules and by-laws in an effort to maintain the unique character of Longmeadow.

I feel that my education and work experience will continue to be of great assistance in evaluating proposals from a different viewpoint as I work with the others on the Planning Board and coordinating with other Boards for the betterment of all residents in this lovely town of ours.

I ask for your vote on Election Day, Tuesday, June 16.