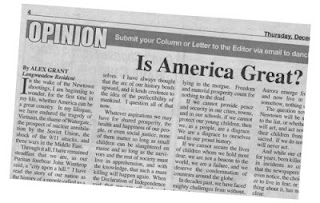 In the wake of the Newtown shootings, I am beginning to wonder, for the first time in my life, whether America can be a great country.  In my lifespan, we have endured the tragedy of Vietnam, the shame of Watergate, the prospect of nuclear annihilation by the Soviet Union, the shock of the 9/11 attacks, and three wars in the Middle East.  Through it all, I have remained steadfast that we are, as our Puritan forebear John Winthrop said, a "city upon a hill."  I have read the story of our nation as the history of a people called to a higher purpose, as expressed in the Mayflower Compact, the Constitution, and in our current form of government.

American courage and ingenuity, displayed for generations, from the War of Independence to World War II to the Cold War, have been placed in service to the rest of the world and to ourselves.  I have always thought that the arc of our history bends upward, and it lends credence to the idea of the perfectibility of mankind.  I question all of that now.

Whatever aspirations we may have for shared prosperity, the health and happiness of our people, or even social justice, none of them matter so long as small children can be slaughtered en masse and so long as the survivors and the rest of society must live in apprehension, and with the knowledge, that such a mass killing will happen again.  When the Declaration of Independence said that we are all endowed with the unalienable rights to "Life, Liberty, and the Pursuit of Happiness," it was no mistake that "Life" came first.

Life is first because everything else flows from it.  The society we hope to build in the coming years, however much we succeed in our aims, will be of no use to the Newtown children lying in the morgue.  Freedom and material prosperity count for nothing to the dead.  If we cannot provide peace and security in our cities, towns, and in our schools, if we cannot protect our young children, then we, as a people, are a disgrace.  We are a disgrace to ourselves and to our proud history.  If we cannot secure the lives of children whom we hold most dear, we are not a beacon to the world, we are a failure, and we deserve the condemnation of countries around the globe.

In decades past, we have faced mighty challenges from without, forces bent on our destruction.  We have been bloodied but not beaten.  The problem of gun violence, however, is one of our own making, and being within our control, it ought to be susceptible to solution.  But the list of mass killings has grown, they have become more frequent, and we remain paralyzed.  Places like Columbine, Virginia Tech, Aurora emerge from obscurity and now live in infamy, and somehow, nothing changes.

The question now is whether Newtown will be simply added to the list, or whether Americans will act, and act now, to prevent their children from being massacred.  If we do not act now, we will never act.  And while our children have, for years, been killed one by one, in incidents so commonplace that the newspapers often do not even notice, the choice of whether to live in fear, or to do something about it, has never been so clear.

Are we so enured to gun violence, are our hearts so hardened, that even this will not awaken our consciences?  In 1929, the murder of seven Chicago mob associates on Valentine's Day was enough to spark public outrage, and that outrage led to the downfall of Al Capone, whose organization carried out the killings.  There was a time when we cared, when we refused to live amid anarchy and killing.  We have to care enough now to change, to change our hearts and our ways, to make it so that Newtown will never happen again and children will not have to live in fear.

Alex J. Grant is a lawyer living in Longmeadow.
His email address is alex.grant68@yahoo.com.
Posted by Jim Moran, LongmeadowBiz at 11:07 AM No comments: