Have you been to www.longmeadow.org/library and wondered about that link to Digital Books, Audio and Video? Would you like special help getting started with this new offering? Then come to a special event on Thursday, August 28th at the Agawam Public Library, 750 Cooper Street, sponsored by OverDrive Media and CWMARS. A 74-foot, 18-wheeled Digital Bookmobile will be there from 10:00 a.m. to 5:00 p.m. on its only stop in western Massachusetts! This traveling exhibit for public library download services allows readers of all ages to try out digital audiobook, ebook, and video downloads. Library staff will be on hand to help and advise regarding downloading free software, transferring to compatible portable devices and other matters. We invite you to participate in this unique opportunity and become a frequent user of this exciting new offering in Storrs Library services.
Posted by Farida Pomerantz, Reference Librarian at 11:22 AM No comments:

This fall Massachusetts voters will be asked whether or not to eliminate the state's income tax. The issue, relentlessly pushed for years by the state's Libertarian Party is a perfect example of why the Framers of the Constitution sought to create a "representative" democracy at the national level and to guarantee it in each state.

Supporters of this measure assume that with only half the revenue, state government would only be able to do its most fundamental tasks. What they do not realize is that there is no clear consensus on which tasks are "most fundamental." Because eliminating the income tax will not eliminate electoral politics in the state, what is and is not appropriately provided or subsidized by the state will continue to be determined by politics and public opinion. The temptation to slash the revenues of a government that you think is over-taxing you is great, but the unintended consequences of such a radical move would produce a monstrous backlash as more and more citizens start to appreciate what has been lost.

If this ballot measure were to succeed, it would likely bring the end of the Libertarian Party in Massachusetts and hasten a populist movement to beat all populist movements. The best result for the measure's proponents is a narrow defeat, which would add fuel to their anti-government rhetorical fire, without forcing them to take responsibility for burning down the state with their rigid ideological dogma.

While I will certainly oppose the measure, I must admit to a quiet hope that it passes and serves to totally discredit its advocates. It's like when a parent is constantly nagged by children to give them something they want that the parent knows would harm them. I'm sure every parent is tempted (under duress) to give in and let the kids learn the hard way. Of course, better judgement prevails and the responsible parent accepts the "bad guy" label in exchange for the greater good. This ballot measure provides voters with a similar temptation. I hope and expect that voters will act responsibly and oppose the measure for the greater good, even though doing so will encourage the wrath and whining of the childish, anti-government zealots among us.

As a political scientist, I have long recognized the failure of most citizens to realize what the government does and how important its activities are to the daily lives of individuals. Americans take the good things government does for granted. Those who feel overly burdened by government have the greatest incentive to organize to make it look bad. The majority of us who get more than we give from government are not motivated to similarly organize in support of government. Eliminating the state income tax would radically change the incentive structure for political activism in a way that would soon horrify those supporting this measure. I have to admit, I wouldn't mind seeing that.
Posted by Jerold Duquette at 11:21 AM 1 comment:

Have you seen the "new look" fire hydrants? 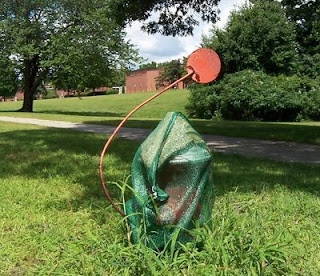 Driving around town I've noticed some fire hydrants covered by a green mesh- certainly not the traditional look. So I asked our Fire Chief and DPW Director a couple of questions about this situation and here are their answers.

How many hydrants are involved? Will they be repaired or is this part of the cost reduction program from the last town meeting?

Most are very old hydrants that are difficult to obtain parts for. This year’s budget does not have sufficient funds to replace all 43 of the hydrants and we are prioritizing which hydrants we are replacing. We have identified about 350 hydrants that we wish to replace over the next several years at an average cost of about $3,000 per hydrant.”

Are there any risks to property owners where there is a non-functioning hydrant near their home?

“No. There is a greater risk if we have a fire and don’t know a hydrant is out of service. When the hydrant is “bagged” out of service, we quickly identify that and find another hydrant to use. Additionally, the water dept supplies us with a list of all hydrants undergoing repair, and tells us when they are back in service.

Puzzled about something that is happening in town....
send us a email to longmeadowbuzz@comcast.net and we will try to get you an answer.
Posted by Jim Moran, LongmeadowBiz at 5:52 PM No comments: