Our town continues to deal with significant water and sewer (storm + sanitary) related issues on a regular basis.  In many cases the problems are caused by aging or overloaded infrastructure.  Cost estimates to fully repair the system were recently quoted by Mike Wrabel (DPW Director) at last week's Select Board meeting at $150 million (see MassLive article).  The financial impact of this infrastructure repair was discussed during the High School Building Project but was dismissed as not having a high priority by the school project advocates.

It's interesting to note that many of the sewer/ water related problems around town are not discussed broadly and only if a major water main break or other infrastructure problem occurs that causes inconvenience to many town residents do people become broadly aware of the situation. Sometimes a water damage/ restoration service vehicle + a dumpster in a driveway are the only clues that one of your neighbors has had such a problem.

While Mr. Wrabel may claim that sewer backup problems for individual home owners do not occur very frequently, a number of my neighbors (4) can share some of the horror stories that have happened to them in the last couple of years.  Consider returning home from vacation and finding 18-24" of sewage sludge in your basement due to a backup in the sanitary sewer in the street. All four of my neighbors can relate to that experience.

At Monday's SB meeting, two of my other neighbors (Jerry and Jacqui Wise) shared their experience with a repeating horror story that has strongly affected their quality of life and pocketbook. 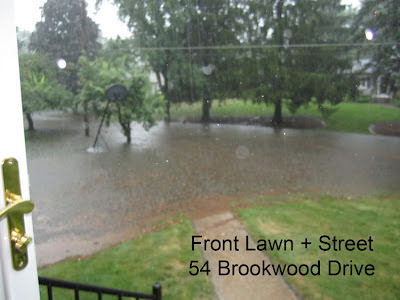 Below is a video clip of comments made by the Wises and their next door neighbor- Michael Scheer at Monday's SB meeting:

One interesting comment made by Mr. Wise is that this specific flooding problem had never been an issue on the street until after the Wolf Swamp Road School renovation project was completed (2003).  The Wises have lived in their home since 1996.  Neighbors across the street who are original property owners (1972) have stated that problem never occurred prior to 2005.

Because the three incidents are considered flooding, none of the damage or possible remedial actions were covered by homeowner's insurance.

Here is a link to the formal letter with additional details that was presented by Mr./Mrs. Wise to the Longmeadow SB. It's also interesting that this specific flooding problem has not been discussed at a previous SB meeting even though the DPW has been involved since 2005.

Let's hope that this "quality of life" issue as well as financial burden for the Wises is resolved by the Town of Longmeadow.

The Longmeadow Buzz will keep you updated.
Posted by Jim Moran, LongmeadowBiz at 4:42 PM No comments: