Future IT Spending- Can we afford it?

After listening to the recent School Committee and Select Board presentations by Kevin Warenda, Longmeadow’s IT Director, I have become concerned about the future level of IT spending.  Between 2007 and the Fall of 2013 when the new high school is opened, Longmeadow will have spent over $2 million on IT related infrastructure not counting any new programs that will be implemented.
Below are video clips of Mr. Warenda’s remarks at the June 13 School Committee and June 20 Select Board meetings (courtesy of LCTV).

Here are some highlights that I extracted from these presentations…
Mr. Warenda proposed the following SC/SB expenditures..

Below is a summary of town/ school IT Capital Expenditures for the past 4 years (including the above) totaling $857K. 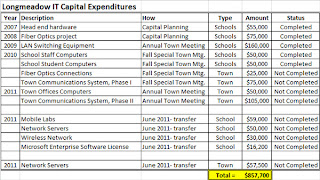 [click here to enlarge]
I also reviewed the FFE (Furniture, Fixtures and Equipment) estimates for the new high school project and found a total of $1.2 million of computer related items (not including computer related furniture).  Here is a link to this documentation.
I think that Mr. Warenda has done a good job of critiquing our town’s IT infrastructure and putting a plan together to remedy the shortcomings.  Some missing pieces include a detailed view of staff needs to support the planned IT expansion.  The proposed increase in the number of school + town computers and network infrastructure will likely require increased staff training, IT support and a significant increase in staff or outside resources.
Our town has many other needs that will require significant outflows of taxpayer dollars.  The latest spending request from our IT Director comes only 5 weeks after our annual town meeting for items that were clearly identified earlier in the year and could have been voted on at the ATM.  The IT consolidation that occurred on January 1, 2011 has essentially disconnected prioritization of IT projects and resource needs from the rest of our town’s capital needs.
At their June 13 meeting the School Committee simply transferred unspent money from various line items for the latest $50K expenditure and the Select Board used unspent monies to fund their $57.5K  portion of the IT infrastructure upgrade.  All of this money would normally have reverted to free cash at the end of the fiscal year on June 30 and become available for other uses at the Fall Special Town Meeting and beyond.
From these recent events, it certainly looks like this approach of bypassing town meeting has become a new funding mechanism for our growing IT capital needs.

I am a great believer in the value of technology in our schools and the business world.  However, we cannot afford to spend for IT infrastructure at these high levels and simply ignore our other needs as a town.

I would like to see the Capital Planning Committee include IT spending as they look at the entire town’s capital needs so we can spend our limited financial resources wisely.
Posted by Jim Moran, LongmeadowBiz at 5:22 PM No comments: