From the Desk of Longmeadow Police Chief John Stankiewicz

The following was published in the July 2016 Longmeadow Police Department Monthly Report.
Policing in Longmeadow is a stranger offering to pay for your coffee while standing in line at Starbucks and an intoxicated and defiant man pushing an officer in the chest.  It’s stopping a new driver for speeding and warning him to slow down or the next time he will receive a ticket and sitting in an unmarked vehicle, with the engine off, in a parking lot in 90 degree heat for hours, waiting for drug a deal to go down.

It’s your spouse asking you when you’re going to bid off the midnight shift and your 8 year old daughter calling to make sure you are safe. It’s missing your son’s Saturday soccer game and a Christmas dinner at home with your family.

It’s also putting a compression dressing on an accident victim who has a severe laceration while re-assuring them they will be all right and being ridiculed and sworn at by a woman for arresting her husband who moments before had punched her in the face.

It’s manning a public information booth at Longmeadow Days and engaging in conversation with adults and children alike and giving a tour of the station to a group of wide eyed boy scouts.

It’s talking to teenagers who have questions as to whether an officer can search their backpack for alcohol and answering the mundane question of a stranger; “where is a good place to eat” or “how do I get to……”?  And, the mind numbing chore of checking businesses, The Meadows and side streets at 2, 3, & 4 AM.

It’s conducting an investigation and working on leads to locate stolen jewelry that has profound sentimental value in hopes of  being able to return it to its owner and performing CPR on a 17 year old who OD’d on a lethal dose of alcohol and opiates while in the background hearing the mother’s and father’s screams of anguish and despair.

Although there has been extensive media coverage replaying the actions of overzealous officers, with more than 12,000 agencies operating in the US and more than 477,000 law enforcement officers, the number of incidences of misfeasance, although appalling, is minuscule.

A warrior one minute and a guardian the next, an officer must adapt.   With the fatal ambushes of police officers both in Dallas and in Baton Rouge, the job has changed.  Even in Longmeadow, officers are a little more cautious…. It has changed the way we patrol.  When conducting a traffic stop, officers are taking more time to assess the situation before exiting their cruiser and approaching the vehicle.  Responding to calls for service in a remote or desolate area in Town has evoked a level of vigilance that wasn’t a concern a month ago; could someone be concealing themselves or lying in wait?

Officer are reminded to check their weapons before every shift, to discuss officer safety best practices, and to rely on their tactical training that was learned in the academy and is reviewed every year during in-service training.

Fortunately, over the last month there has been an outpouring of support from the community.  Adults, children and seniors alike have been stopping by the station and bringing in gifts of food, soft drinks and yes, even donuts.  These gestures and well wishes are humbling yet confirm that the officers and staff of the Longmeadow Police Department are professionals, are providing a valuable service and their work is appreciated by the community.
Posted by Jim Moran, LongmeadowBiz at 9:39 PM No comments:

This article was submitted by the Longmeadow Adult Center Building Committee (ACBC) summarizing results of a Focus Group Meeting held with a group of Longmeadow residents on August 3, 2016 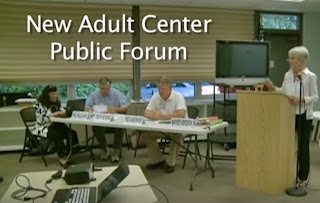 Approximately 50 Longmeadow residents from a variety of constituent groups attended a focus meeting on August 3, 2016 at the current Greenwood Adult Center at 251 Maple Road to discuss the siting and construction of a new senior center in Longmeadow. Included were Select Board members; Longmeadow officials and employees, seniors, sports parents, other town committee members, site neighbors; Adult Center officials and board members; FOLOCA (Friends of Longmeadow Older Citizens Association) representatives; ACBC committee members; media and other interested community members. Presented by the Adult Center Building Committee (ACBC), the eleven member group chaired by Marybeth Bergeron, were on hand to inform residents of the group’s progress in identifying various sites in Longmeadow conducive to locating an appropriate building site.

Joining Marybeth at the front table were ACBC members. They were Phil Hallahan, co-chair, Fred VanDerhoof and Tim McKenna, the evening’s presenters and Pat Burden, secretary and recorder.  She also called attention to present Select Board members Mark Gold, Bill Low and Marie Angelides who serves as liaison for ACBC and thanked them for attending. She announced that the focus meeting format would be a formal presentation by committee members, a Q&A session following the presentations and a brief survey distributed for input. Also, that the evening’s meeting was televised on local cable TV.

She explained that ACBC consists of 11 community members who represent all aspects of life and possess years of experience regarding the project. The members’ mission is to identify a suitable site to construct a suitable adult center that will be presented to the Select Board before its first meeting in September. If approved, it will be presented to the broader community at the November town meeting.  It was stressed that ACBC members represented all present and input was of most important.  “We want your input,” Marybeth declared. She emphasized the importance of transparency and the significance of neighborhood and political impact.

Bergeron commended the committee for their diligence, many hours and commitment to the process. She highlighted the amount of work executed by the committee such as: meetings with historic commission, library trustees, town manager, conservation professionals, athletic directors, park and rec officials, DPW and others. They studied site maps, deeds, plans, Article 97, field use and non-use, even the original Frederick Low Olmstead designs (which in some cases have not been completed or terribly neglected). They have explored open space noting the 1/3 of Longmeadow is “open space” and therefore available for recreational use.

Bergeron added that East Longmeadow Senior Center at 15k square feet is presently stretched for space. She noted a fact that, here in Longmeadow, there are more 60 and over folks than there are under 16 youngsters. With the onset of the baby boomers and the particular needs of the group, many area senior centers are emerging- Agawam/ Hampden/ East Longmeadow/Wilbraham (upcoming)/ Westfield and Chicopee.  By 2030 a 30% increase in senior population is anticipated. “Seniors want to age in place, stay at home, live and function at home.  It is fruitful and rewarding.  We need a larger center. Let’s get ahead of the curve!”

Fred VanDerhoof was called on to explore Turner Park, Laurel Park and Bliss Park, all of which are doable properties. He exhibited colored maps to locate the properties.  He highlighted Turner Park’s amenities including extensive trails, beautiful pond, trees, serenity, location to existing fields and opportunities for intergenerational activity.  He stated that kayaking , fishing, biking, hiking on improved trails are some of the favorable features. Also, sharing the facility with the town with use of rest rooms, meeting spaces, food concession, paved parking enhances its value to townsfolks.

Fred then identified Laurel Park as a “nice piece of property”…gorgeous hiking trails, serene pond, waterfall and its hidden beauty and environment for locating a new adult center, “a good feel to it.”  He went on to state that favorable location to Bliss Park, Police and Fire Department and center of town accommodates senior needs and activities. And its present state of neglect would be remedied.

Bliss Park, Fred reported, has great synergy and opportunity.  Pool, tennis courts, walking trails, proximity to town; little infringement on neighbors adds to its favorability. Public restrooms, presently closed, would be accessible. Site improvement of trails, lighting and paved parking would enhance the property for all to enjoy.

Tim McKenna was called on to report on the Cordis/ Library Property. Using a lighted pointer, he touted the center’s potential location on the central artery, close to the “heart of town.”  The availability of public transportation, location of town offices, additional public parking for town events adds to its desirability. It is flat, adjacent to churches, perhaps some wetlands with Meadowbrook, tight but with careful site planning and sensitive design to the other properties on campus, the overall project  provides an opportunity for the town  “looking back and looking forward. “

He went on to say:  It is, however, necessary to acquire the Cordis properties at an approximate cost of $1 million. These reconstituted properties could be resold or retained for town use which direly needs more office space. At any rate, it is an opportunity for the town of Longmeadow, he stated.

Thus concluded the formal presentations and Marybeth opened the floor to questions:

Where will they be sited?... Depends on each site and architect’s design in balance with site.
Will fields be impacted on Cordis site?...Strople Field will not be touched.
Will Cordis be torn down?...Absolutely not.
Will Casino traffic affect the choice?...Not known what Casino traffic will entail and at what times of day. A traffic study is pending.

Ernie Welker, Audit Committee member, reports that the town is in trouble financially and cannot afford a new center.  He suggested that Greenwood Park be renovated regardless of losing playing fields. Eleanor Stolar reiterated the importance of addressing seniors’ needs and having them stay in Longmeadow.

Jim Russell asked to be recognized. He clarified the fact that ½ of 1% of the town budget is directed the Adult Center annually.  He advocated that a need for privacy for veterans is evident and constructing a new center rather than renovating the present center even without unknown infrastructure issues is less costly.

The prepared surveys, whereby attendees could make comments and/or chose preferred sites, were distributed. Providing ones name was optional. Surveys were collected and will be analyzed before the  next committee meeting Thursday, August 11 at 7 p.m. All meetings are open to the public.

The next Adult Center Building Committee (ACBC) Focus Meeting will be held at Greenwood Park Adult Center on Wednesday, August 24 at 3 PM. Once again the public is invited.

The televised meeting of August 3 can be seen on the following dates:
Air dates on LCTV 12 (Longmeadow only)

Posted by Jim Moran, LongmeadowBiz at 4:55 PM No comments: