History of the Longmeadow Town Green- Part I

The Town Green has been the focal point of life in Longmeadow for a long time. This summary (Part I) looks at the changing landscape of the Town Green from the late 1700's to the early 20th century. 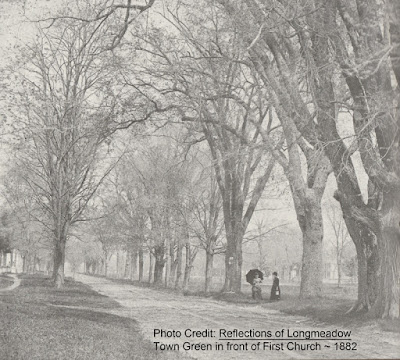 Here are highlights of the early history of the Green through the early 20th century....

Here are some additional details....

The Centennial Book provides a great snapshot of the Green in the early days following the American Revolution.  Here are a few excerpts...

"THE BROAD AND BEAUTIFUL LONGMEADOW STREET has been at different times the subject of many votes, showing how narrow has been its escape from the most serious encroachments, urged in the interest of individuals, or even of the public itself.  It may surprise some to learn that the present central section of park-like sward was originally a long sand-drift, -similar to many now found in the wood-belt eastward, and that this was reclaimed and converted into its present verdure by a process of enrichment and cultivation extending over several years, carried on by a citizen (Capt. Calvin Burt), who was permitted for that purpose temporarily to enclose a long section of the street. The northern half of this same central section was also by town permission occupied for many years by a central series of shops, stores, and manufactories, under forty year leases, in the same way that the front portion of the Burying-Ground grant was permitted to be occupied by a blacksmith's and a wheelwright's shops."

"These last [blacksmith and wheelwright shops], unfortunately, by unchallenged occupancy for more than forty years, gained finally a title to the land itself which it cost the Parish several hundred dollars to extinguish when this corner was desired as a site for the remodeled Church edifice in 1874.  Fortunately the danger was earlier discovered in regard to the Main Street [Longmeadow Street] leases, and the removal of all those buildings was secured at the expiration of the lease-term- while a sentiment of jealous and loving care now exists which would make their renewal forever impossible."

The Town stopped granting 40 year leases to build shops in the street (Town Green) in 1795.  By 1831- because of expired and unrenewed leases, there were no shops remaining on the Green- only the School House and the Meeting House (see Figure 1 below).  The School House burned down in 1851.

The 1870 map in Figure 2 shows the sheds which are the blacksmith and wheelwright shops referred to in the above passage.  Because the blacksmith and wheelwright shops (west of the Olde Burying Yard) had been in place for greater than 40 years, the renters became owners (squatter's rights ?) and the Parish was required to purchase the land when the Congregational Church was moved from the Green to its current location in 1874.

By 1870 the only remaining structure on the Green was the Congregational Church which was moved to its current location in 1874 (see Figure 2). 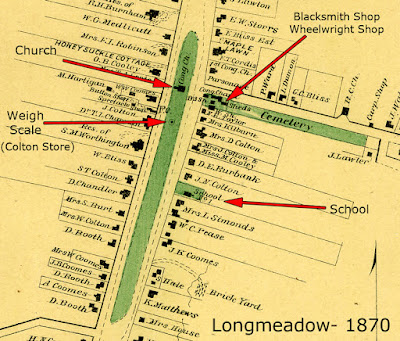 The Old Country Store built by Calvin Burt and Stephen Cooley in 1805 remains today as the Spa-on-the-Green/ Dr. Glen Brooks as the only commercial business on the perimeter of the Town Green.


After the split of East and West Villages of Longmeadow on July 1, 1894, the Springfield Street Railway launched a commercial enterprise to provide trolley service from downtown Springfield to Enfield, CT.  The original layout of the trolley tracks shown in the 1894 map (see Figure 4) avoided use of the Town Green but the final implementation actually utilized a significant portion of the Town Green for the tracks and electric power poles/ wires (see Figure 5).  Trolley service was initiated in 1895 and the last trolley run was in 1940.
Below is an Emerson photo- Figure 6 (courtesy of the Longmeadow Historical Society) showing the trolley tracks traversing the Town Green.
The next increment of this story is Town Green in the 20th Century- stay tuned!
Posted by Jim Moran, LongmeadowBiz at 2:54 PM No comments: