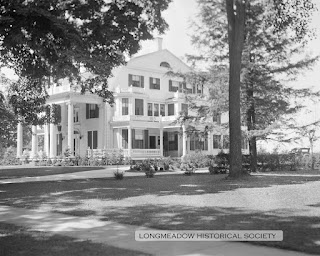 Fifty-Five years ago, Mary Ida Young passed away.  She died at home , located at 734 Longmeadow Street at the age of 95.  In 1959 she had fallen and was recuperating in her residence for a year or so. Although married four times, it was her second husband who had the Young name, which she retained after her last mate died. I bet she is rolling over in her grave these days. I hate to think of her watching from the clouds as her beautiful mansion falls apart. So much for heavenly rest.

The colonial revival Victorian masterpiece, built in 1884, is deteriorating before our eyes.  Looking sadder and more lonely each day, our town leaders are trying to resolve the situation.  Who can we contact? The National Trust for Historic Preservation or the Society for the Preservation of New England Antiquities should come here and save this mansion, but even our local Longmeadow Historic District seems unable to take action in a complicated legal situation involving foreclosure.  Now owned by a bank, we hope and pray for an angel to restore the home to its former grandeur and glory. This significant local architectural wonder was recently featured in an article in the Springfield Republican. People are taking interest and it’s a topic of conversation in town.

The Wood Museum of Springfield History is a special repository of historic documents and images.  At the Longmeadow Historical Society’s booth during the Long Meddowe Days weekend celebration, I first gazed at some impressive images displayed of the Young House. Some of the photographs are illustrated here, showing the grounds and interior. 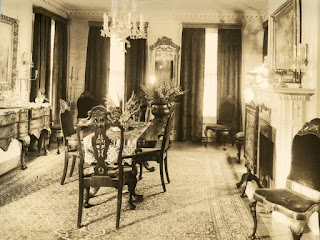 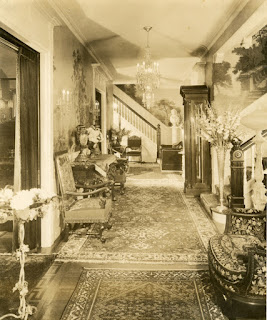 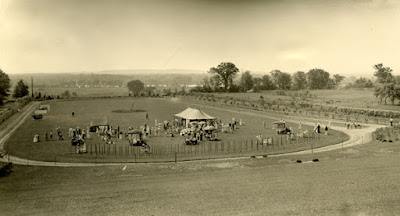 Mary Ida lived there from 1922 to 1960 as wife of the inventor of Absorbine Jr.  The liniment was initially created for horses, and she was a horse lover. She had a racetrack behind her home in the meadows near the river in the area now home to the Interstate I-91.  The event grounds and house provided an elegant backdrop for fundraisers, parties, benefits and various special gatherings. Her obituary describes teas, dances and bridge parties occurring at her home over the years.  As a gardener she tended to orchids in her greenhouse and also owned many animals. In addition to her horses, at various times she owned deer, raccoons, peacocks, geese, swans, doves, turkeys, chicken, pheasants, dogs and sheep. She helped establish the first Republican Club in Springfield and attended Springfield’s Trinity Methodist Church each Sunday driven in a horse drawn carriage.

After her death, her grandson and his wife and family moved into the imposing residence despite concerns that the estate might be sub-divided into a development.  The traffic had lessened at this point in time because the meadows was now bisected by the new highway. Cars and trucks no longer needed to come directly through town, enroute to Springfield and the north-south corridor.

The condition of this historic structure is of great concern, especially after such a bitterly cold winter.  Many older homes need special upkeep and caring for them could make them less desirable to potential buyers who lack vision.  It takes a special person, with an appreciation of history, to responsibly restore and renovate such a home.  Let’s hope it‘s not too late for the Young house.  The place is a gem, and its central location on the town green makes it a prominent landmark for future generations…if it lasts!

submitted by Betsy Huber Port
Posted by Jim Moran, LongmeadowBiz at 11:13 AM 2 comments: 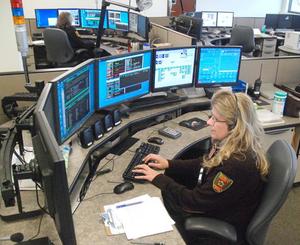