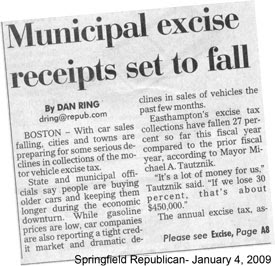 In past years, the challenge to town leaders has been to prepare a balanced budget that meets the needs of our town for the upcoming fiscal year starting July 1. Let’s hope that we do not have make emergency cuts in town services before July 1 because of revenue funding shortfalls.
Posted by Jim Moran, LongmeadowBiz at 2:08 PM 1 comment: