An argument against having a casino in Springfield

The following was submitted to the LongmeadowBuzz blog by Michelle Steger, a resident of Longmeadow, MA. 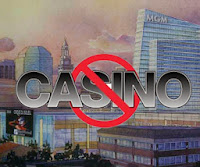 “Do you live within a few miles of the proposed casino site in Springfield, and could any roads in your town be used as a cut through to access the casino?”
“Yes on both counts,” I replied to the woman working for the North Stonington, CT Select Board Office.  “Then your town will never be the same if the casino comes to Springfield.  It’s been so painful for us here,” she said.

My conversations with this woman and other town leaders who live in communities surrounding Foxwoods Casino in Connecticut have haunted me.

I am not from around here.  I was born and raised in Dallas, Texas, but growing up, I always wanted to live in New England.  When I first visited Longmeadow, where my husband, Ted, grew up, I knew I had found my home.  We have been here for 5 years now, have a 1-year-old son, and could not be happier.  However, when we first heard that a casino might be placed 2.5 miles from our house, we wondered what impact that might have on the community we love so much.

My husband and I are not experts, but we have been humbly asking questions and seeking answers for the last year, and the more we have learned about casinos and the way they operate, the more concerned we are about what a casino in the South End of Springfield would mean for Springfield, Longmeadow and other surrounding communities.  This concern has led us to join with other concerned citizens to form a group, No Casino Springfield (www.nocasinospringfield.com) that will be hosting a Call to Action on Wednesday October 23rd at 7PM at St. Andrew’s Church in Longmeadow.

Before we get too deep into the argument against having a casino in the area, we should probably set the stage to make clear where we are in the process.  Under the Massachusetts gaming law, a commission was formed called the Mass Gaming Commission (MGC), and it is made up of 5 people who are tasked with deciding which applicants will get a casino license in each of the 3 regions of the state.  In Western Mass, there are 2 contenders.

Springfield, which signed a host community agreement with MGM, held their referendum in July, and it passed 57-42.  Now that sounds like a big margin until you consider that Everett, MA passed their referendum 83-17.  And when you consider that MGM spent $12 million to try to win the vote, the fact that they could not even get to 60% tells us that there is not overwhelming support for a casino in Springfield, which is something that the MGC has said that they would like to see.

The town of Palmer has signed a host community agreement with Mohegan Sun, and they will hold their referendum on November 5th.

We have been encouraging people in the region to provide enthusiastic opposition to a casino in Springfield, and the citizens of Longmeadow have two ways to provide that input.
So, I may not be from around here, but I want to do everything I can to keep my adopted home casino-free.  Below is a summary of some of the reasons and evidence for why I oppose a casino in Springfield, and why I hope you will join us in our efforts.

Traffic / OUI
Economic Impact
Social Costs
Jobs
Mitigation
Long Term Prospects
For more information, or if you’d like to get involved, feel free to contact us at nocasinospringfield@gmail.com.