It’s usually this time of year when one notices a miracle somewhere, and it’s been one miracle after another for the Longmeadow Knights, this small town’s Cheerleader Competition Team. Placing second, and only .5 points away from first, in a qualifying competition in Boston recently, the Longmeadow Knights qualified for nationals and received a bid to attend the National High School Cheerleading Competition at Walt Disney World in Orlando, Florida, February 11-12, 2012. The NHSCC is considered the most prestigious cheerleading championship in the country. This ESPN-hosted event is nationally televised on ESPN and ESPN2 to over 100 million homes and 32 countries nationwide each year.

It was truly a miracle that brought them to this moment. Before their qualifying performance in Boston, the cheerleaders awoke with a message from their Coach, Jessica Prokup, that one of their flyers had a badly hurt ankle, leaving the team uncertain as to the day ahead. With the high morale and spirit the team has consistently shown, the team travelled to Boston with the hope they might perform all the while anxious for their teammate, who was blessed to have a parent in tow with sports therapy skills. They wouldn’t know until moments before the performance that they were going before the panel of judges, but perform they did! Maybe it was for their wounded flyer that they performed so well, or maybe they just realized how incredible they’ve become as a team. After they finished their choreography, not one cheerleader was looking at the board to see where they placed, only at each other with relieved faces and hearts that they completed their performance. Their devotion to each other was sincere and not a dry eye from the team’s fans was found. The fact that the Knights placed second and so close to first place afterward only added to the miracle they believe will continue as they head to Orlando. It’s a significant year because half of the team will be leaving for high school next year, and this is their last opportunity to perform at such a prestigious level together.

With only two months to plan, the expenses for this Longmeadow team of 22 girls, in grades 4 - 8, are costly. The girls are trying to raise donations to help offset the expenditures of this once-in-a-life time experience and only have two months to do it.

They are asking for support from local businesses and individuals who wish to be a part of the event by sponsoring the team in Orlando. Sponsors will receive recognition.

These cheerleaders are grateful to represent Longmeadow and the State of Massachusetts and would love to do so in the best way possible. Team spirit is soaring while the girls visit the community to seek their support.

Read a  Letter to Potential Sponsors
Submit a Sponsor Application

For additional information on sponsorship or to learn more about the Longmeadow Knights, please contact longmeadowknights@gmail.com
Posted by Jim Moran, LongmeadowBiz at 5:04 PM No comments: 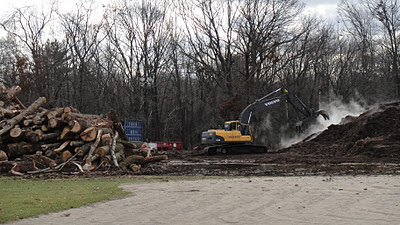 According to Bill Johnson, Senior Project Manager for AshBritt Environmental, tree debris pickup on Longmeadow town streets will be completed by the end of this week. The pile of wood chips currently located on the WS playing fields is scheduled to be removed by year end. The collection crews will take a Christmas break and will return to finish cleanup in town parks, etc. Total debris estimate is ~ 270,000 cubic yards.

Below is a video of the tree debris reprocessing operations at Wolf Swamp Road fields...

Posted by Jim Moran, LongmeadowBiz at 2:22 PM No comments: