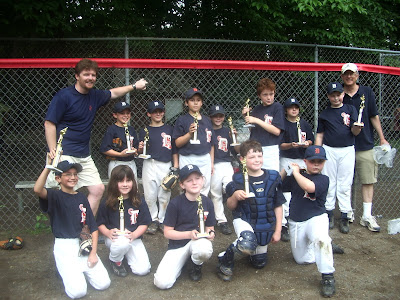 The Tigers of the Longmeadow Little League's American League fought off a tough Mariners team on Saturday at Strople Field to complete a dream season. The 2008 Tigers finished in last place and this year, with many returning veterans,the Tigers finished first in the 2009 regular season and rode its #1 tournament seeding to three straight playoff wins and a league championship.

The only team in the league that defeated the mighty Tigers this season was the Orioles, who actually did it twice during the regular season. Luckily, the Tigers broke the Orioles' code in the final regular season contest to lock up the number one seed and defeated them decisively in their playoff matchup.

The Tiger front office is eager to keep this squad together for next year. No doubt, the National League coaches will be swarming, but the Tigers coaching staff has high hopes of re-signing its veterans. When asked if he intended to pursue free agency after this season Tiger slugger Jeff Mueller replied,"I like ice cream." After his spectacular catch at a pivotal point in the championship game, Tiger outfielder Chris Scheidecker will no doubt be fielding many endorsement offers. Thankfully, the Tigers have an option on his contract for next year.
Posted by Jerold Duquette at 4:23 PM No comments: