My interview with Senator Eric Lesser 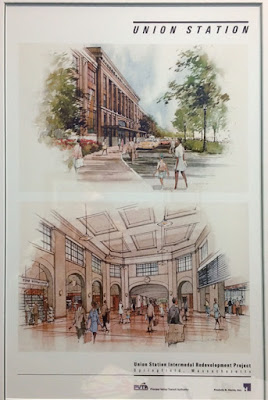 The train may not stop here anymore, but please keep your fingers crossed folks! Soon we will be more connected than ever before! If things proceed as planned, we will once more be connected via train to the North-South Corridor from Springfield to Hartford, New Haven and New York City.  This should happen sometime in 2017, which is really not that far away!  Thank Eric Lesser and other hardworking leaders for joining together with legislators from Connecticut to make this dream a long-overdue reality!

There is bi-partisan support with 25 co-sponsors in the House and the Senate for legislation S. 1849. This act will study the feasibility of high-speed rail access between Springfield’s Union Station and Boston’s South Station. The issues to be explored are capital costs, revenue estimates, projected ridership levels, environmental and community impacts and ways of funding. There will probably be creative funding possibilities with a combination of federal, state, local and private sector contributions to the equation. Union Station’s renovation should be completed by the end of next year!

I had the opportunity to sit down and chat with Eric and some of his staff recently at the Lesser Headquarters in East Longmeadow. I remember Eric as a middle-schooler, so I feel a sense of pride that this Longmeadow student is now a successful senator. Eric explained the challenges and hopes he has for the high-speed rail to be realized in Western Massachusetts. The benefits will be transforming! The job opportunities will be greater, the housing values will increase and we will feel like a bigger part of the New England Community. Eric explained that when the old train system existed in the late 19th - early 20th century, Springfield was the crossroads of New England. When the cars, trucks and other vehicles were created about 100 years ago, the roadways were upgraded and expanded. In the 1950s, when the interstate highways became a reality, the Hartford area became the “new” crossroads as I-91 and I-84 intersected. In some ways, Springfield was forgotten. Also, the “Westa Worcester” mentality added to our isolation from Boston, although we are in the same state. Part two of the high-speed rail story will be the inland connection. We are 55 miles away from Worcester, and tracks do exist for freight trains. We need to reconnect to Worcester and improve the tracks to create a high-speed means of transportation to our Massachusetts State Capital. We do not have a firm timeframe for this, but Lesser is optimistic futurist.

Imagine this: getting to Boston in less than two hours via rail and also getting to Manhattan quickly and easily. No more traffic on the roads… If we can make this a reality, then our community will be connected once again! Twenty years ago when we were considering moving to Western Massachusetts, I was shocked at the idyllic but cut-off quality of the Springfield area. Remember, this was before the proliferation of cellphones, laptops and before everyone had an email account. Times have changed! We need to make our area part of a greater commuter rail system. In Europe this high-speed rail connectivity has already been a reality for ages. We are behind, but we don’t need to stay there!

I often forget that the train tracks still exist in “The Meadows”, but there are reminders. When I walk the dog down in the Fannie Stebbins Conservation area, I hear a train whistle around 11 am. Sometimes in the middle of the night, I hear the evocative whistle as part of my dreams. The tracks are there, we just need to improve them. Speak up! Tell your state reps that this is a huge priority for the next generation. Eric Lesser is part of a bi-partisan initiative to get us back on track – literally!

Posted by Jim Moran, LongmeadowBiz at 12:27 PM No comments: