I attended the SBC meeting last Thursday night and as usual there was little public attendance- 2 town residents (including myself).  I attend these meetings because of my interest in knowing first hand how this committee is going to spend my taxpayer dollars.
In my past SBC meeting notes, I have noted discussions about the likely project bids being much lower than the estimated $78 million… perhaps as low as $60-65 million given the recent bids for other area high school projects. The new Wilbraham-Hampden Regional HS project is expected to cost $65M (see latest projections as of 12/10/10) vs. original $82.2M with forecasted savings to district taxpayers of $3.8M.  With a significantly lower MSBA reimbursement rate Longmeadow could potentially see much greater savings.

Last June Longmeadow voters gave the SBC authority to spend up to $78 million.  Comments by some SBC members at the October 20 meeting (see notes) and at Thursday's meeting have suggested that because there will be a pot of “unspent” project dollars, the committee should consider adding additional project elements that were not part of the original scope.  Discussion at this meeting also hinted at a possible “spending strategy” to install synthetic turf on the stadium field.  Read the meeting notes below for details.
The agenda for this meeting was of particular interest since there was going to be a discussion + a vote on various project “add alternates” + a number of project scope decisions.  Below are my “meeting notes”…
Scope changes were reviewed and voted.
Bid “add alternates” (AA) were discussed.
“Add alternates” are possible project additions to the original scope that are included with the project bid specification package.  A Guaranteed Maximum Price (GMP) is developed from this information but this price does not include these AAs.  If the project has unspent money because the GMP is less than the $78 million, some or all of these AAs can be implemented by the SBC.
Tom Murphy of Joslin Lesser & Associates explained there are two types of add alternates… “trade” and “non-trade”.  In accordance with MGL Chapter 149, the “trade” AAs need to be prioritized and implemented in order.  If a decision is made that the SBC does not want to implement AA #1 then they cannot implement AA #2.  The other type AAs, “non-trade” do not require prioritization and any of them can be implemented by the SBC using unspent project monies.
Here are the add alternates that were discussed.

#1: replacement of the natatorium ceramic tile floor + relocation of the diving board, cost = $200K

This 1971 wing renovation item was not included with the original project scope.  The pool area floor has some missing tiles and the current location of diving board presents some safety (?) related issues.

This is an item that does not need to be done at the time of the project and could be deferred and implemented through the town’s capital spending plan. SBC member Roland Joyal voiced his strong support for this item.  Because we are building a “new” showcase school, we need to upgrade this part of the facility as well.

#2: Addition of hydraulic lift for the auditorium orchestra pit, cost = $400K
The current project plans include a manual lift system that takes time and resources to move the platform.  Probable use is about 12 times/ year. This item cannot be incorporated at a later date and needs to included in the project bid specification package.   In addition, OMR needs to complete a design for the bid package.

Superintendent Marie Doyle and LHS principal Larry Berte both favored this item (as did Michael Mucci- LHS music dept chairman) and rated it as a higher priority than item #1.

The SBC decided to defer prioritization of the trade AAs until the next SBC meeting on January 5.

#3: Under terrace outdoor storage, cost = $150K
This item is an additional outdoor enclosed area for storage of equipment and utilizes space under the arts terrace on back east side of the building.  This addition would include a concrete slab on grade and would be useful for storage of equipment including athletic field items that are currently stored under the stadium bleachers.

There were positive comments by Mike Wrabel and other members of the SBC for inclusion of this item.

#4: Additional site landscaping features, cost ~ $100K
This item is a combination of aesthetic landscaping + function including an outdoor classroom(s), benches, etc.  At this point the details are not fully developed and the quote is only a best guess estimate.  There was some discussion that this would be a great project element for public donations.

#5: Synthetic Turf Practice Fields, cost ~ $600K+
There is no provision in the original project scope for installation of synthetic turf practice fields.  The current athletic practice fields will be damaged or eliminated during construction so existing project plans included installation of two new natural grass fields (see drawing).  This synthetic turf proposal was originally limited to the full size field on Grassy Gutter Road/Bliss Road.  However, just this past week a second synthetic turf practice field (located near the gymnasium) was proposed as a possible add alternate.  The $600K quote does not include lights or the second field installation.  $25K for a detailed design package is required in order to include this add alternate in the bid package.  This money would need to be spent even if the SBC decided not to go forward with this AA. 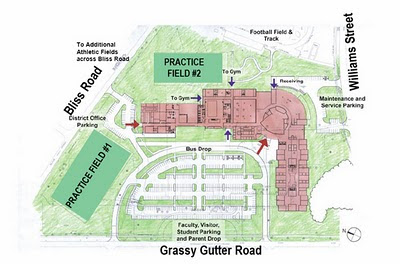 Co-chair Barkett commented that it was Alex Rotsko, LHS Athletic Director who asked for the second synthetic turf practice field.  However, because neither of the new practice fields was lighted, he was not completely satisfied with the plan.  Mr. Barkett stated that Mr. Rotsko would rather see the SBC support installation of synthetic turf for the stadium field.
At this point a number of SBC members voiced their opposition to expend significant money for new project elements that were outside of the original scope.  Both Ms. Jester and co-chair Swanson voiced concerns about supporting this synthetic turf AA and thought that the SBC should solicit feedback from the community.  In addition, Ms. Jester felt that there was insufficient information available about the subject.  Co-chair Barkett felt that the synthetic turf practice field(s) were not outside the scope and that town residents need not be consulted.
Mr. Joyal who had originally proposed synthetic turf for the stadium field during the October 20 SBC meeting (see meeting notes) felt that the SBC already had the authority to do so.  He also stated that most new high school projects included synthetic turf fields (representatives at the meeting from Gilbane stated that this was not true). Mr. Joyal also stated that “sports is the front porch of your school” meaning that if our new high school is built without a synthetic turf stadium field, our school would be looked at as an inferior facility.
An interesting comment was made by Jeanne Roberts of OMR who reminded the group that funding for many of the new public high schools with synthetic turf cited by Mr. Joyal were funded at a much higher MSBA reimbursement rate than what Longmeadow will be receiving.
Co-chair Barkett stated that the cost of synthetic turf for the stadium field would likely be much greater than $600K since the Americans with Disabilities Act would require a significant upgrade to the high school stadium.  He also believed that installation of synthetic turf for the stadium field was not within the project scope.
Town Manager/SBC member Robin Crosbie proposed that the SBC defer a decision on the synthetic turf until next year and use next year’s Annual Town Meeting to introduce a warrant article to use unspent project monies to install synthetic turf on the stadium field.   This warrant article would only require a simple majority YES vote to pass.
The SBC voted to not include synthetic turf in the project add alternates list but there was a recommendation to form a subcommittee to develop more information on the proposal for later consideration.
Last June Longmeadow voters gave the SBC the authority to build a new high school for $78M (in MSBA terminology, it was a building renovation + new addition, not a new high school).  If the construction climate allows Longmeadow to build this facility for less money, the SBC should try to maximize those savings.  Changes to the project scope to include a hydraulic lift for the auditorium and/ or synthetic turf practice fields are beyond what the average taxpayer voted for last June.
If the town can save $5-10 million on the high school building project, this savings will reduce the taxpayer burden for many years to come.
I would like to see the SBC become more focused upon bringing this project in at the lowest possible price tag- not simply at less than the $78 M. Upgrading the swimming pool area and adding synthetic turf fields should be prioritized with the rest of our town's capital needs. We have many higher priority capital needs in our town.


Don’t forget that our teachers contract comes up for collective bargaining in the next budget cycle for FY2012.
If you are concerned with what you have just read, send an email to:
Robert Barkett-SBC co-chair, rbarkett@longmeadow.org
Christine Swanson-SBC co-chair, cswanson@longmeadow.org
Posted by Jim Moran, LongmeadowBiz at 10:11 PM No comments: