At its April 14th meeting the Longmeadow School Committee rejected a resolution adopted by the Amherst School Committee as well as the Longmeadow District Learning Team, which called on the state legislature to make immediate changes to education funding and to “explore” additional spending increases and revenue raising measures in FY2010.

At the outset, the debate went well enough. The resolution was problematic for some members in its details (the revenue generating recommendations, to be specific). After some discussion (though I would have preferred more) the committee voted four to three against the resolution. While I was on the short end of the vote, I was pleased that the committee members were willing to take positions, defend them, and vote them. Having rejected the resolution I was content to bring the issue to the public and to keep the debate going with the hope that a wider public discussion of the resolution would be educational, and serve to activate voters.

Unfortunately, due to what I see as an irrational anxiety over conflict, a sanitized version of the resolution was offered (sans any mention of raising revenue to pay the tab) after the rejection of the initial version. The “conflict-free” version passed with the four previously opposed members voting for it. Two of the previous yays became nays, and I abstained. For the members who had rejected the work of our DLT and the Amherst School Committee, the second vote provides them with an opportunity to be supportive of the general thrust of the resolution, which was a call for the state to increase special education funding as well as chapter 70 funding. On the down side, it may also have cost us an opportunity to provide political leadership to the community on these very important and genuinely debatable details. Having passed a watered down resolution, the committee may have signaled an unwillingness to remain engaged in the larger argument.

If local elected officials shrink from debates such as this, political progress will be very difficult. School Committee members and candidates talk a good game about “lobbying our state legislators” and getting them to “do the right thing” but rarely understand the wholly vacuous nature of these standard lines. How exactly are requests for more money, without any instruction or guidance, or most importantly, without clear organized political support, supposed to be dealt with by state legislators? Do you suppose they have not been getting these same requests since their first day in office? Does anyone really think that someone has the magical persuasive skill to cause legislators to have an epiphany and realize that the answers were staring them in the face all along? Professional politicians, for better or worse, are moved by votes. Votes are generated by mobilizing interested parties to first see their interest, and then to organize around their interest, and then to act on that interest.

Very few state legislators (especially in states where the position is full-time) mobilize voters around issues. The reason to avoid this practice is simple. Organized, interested voters are powerful. No professional politician who has confidence in her agenda and wants to get re-elected has an interest in creating powerful voters whose power comes from anything other than their support for the legislator herself.

What does all this mean? What does it have to do with a politically gun shy School Committee? Acceptance of the claims above mean that there is a political leadership void that desperately needs to be filled if the needs of our cities and towns are ever going to get proper attention on Beacon Hill. We need local activists and elected officials to engage in the debates that our state legislators refuse to undertake. We need voters to be activated and mobilized around policy arguments.

If communities across the Commonwealth were seriously and regularly engaging these state budget questions at the local level, with local leaders representing sincere positions on taxing and spending policies, the state legislature would have little choice but to take notice. Local debates about state issues create pools of future state legislative candidates, which incumbents would ignore at their own peril. Just as importantly, local debates about state issues lead to the growth of strong grass roots regional and state coalitions, backed not only by ideas, but also by effective voter mobilization networks.

The bottom line for me is that the School Committee, while well intended, may have pushed aside an opportunity to exercise political leadership and set an important example for other elected officials. When we let politicians avoid tough votes and tough choices we make it easier for them to win re-election, but much harder for them to make a positive difference.

Politics aint pretty and it’s not always fun. It is a contact sport that like any contact sport requires players to be willing to get hurt and to play with pain. Volunteer local officials can hardly be blamed for not wanting to leave it all on the field. However, this understandable unwillingness does have serious unintended consequences.
Posted by Jerold Duquette at 2:35 PM No comments: 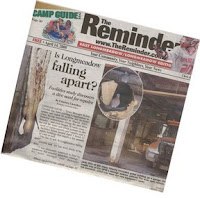 This is the title of the front page story in the April 14 issue of The Reminder. After listening to the public forums on FY2009 budget and the Town-wide Facilities Study in recent weeks and last week’s discussion at the Select Board meeting regarding street drainage problems in the Woodside Drive/ Williams Street area, I believe that the answer to this question is YES!

For many years, Longmeadow has deferred maintenance on its town buildings (even the renovated Wolf Swamp Road and Blueberry Hill Elementary Schools have minimal maintenance other than janitorial services) and other infra-structure and has reduced other town services in order to help reduce the annual budget and avoid the annual need for a Proposition 2½ override. However, last year in order to balance the budget and avoid the significant loss of school and town services, the Longmeadow’s electorate narrowly passed a $2.1 million operational budget override (the first since FY2003).

The FY09 budget to be voted on at the upcoming April 29 Annual Town Meeting is a significant increase over the current fiscal year. According to the recently published Annual Town Meeting warrant, the recommended FY09 total budget is $51.3 million vs $48.4M for FY08)- an increase of $2.84 M or ~ 5.9%.

It is interesting to note that the Proposition 2½ limitation applies to property taxes only which for FY09 is ~ $36.9M- not the total budget ($51.3M). So with limited growth and property improvement, this primary source of increased funding for town spending is significantly less than +2½% per year (less than $1.0M increase in FY09). The town expects an increase in state aid for FY09 of ~ $182,000. So with a budget increase (FY08 --> FY09) of $2.84M other sources like our “free cash” account (aka savings account) are needed to balance the budget. In order to balance the budget over $1 million will be transferred from the free cash account and the operational stabilization fund.

Some urgent items on the town agenda in the next couple of years include….


With limited annual increases in town funding sources and the “demand” by the Longmeadow School Committee for “level services” with rapidly increasing costs, the quality of life in Longmeadow is very much in jeopardy. It appears that unless significant cuts in town (and school) services occur, there will be a Proposition 2½ override in order to balance the FY2010 budget.

We clearly need to look at our fiscal problems not just for the upcoming budget year but forecasted into the future. Last year’s initiative by our Town Manager to structure a three year strategic plan (2007 – 2010) for town related services and facilities was a good start toward the long range planning that this town desperately needs but it didn’t address financial aspects. The Budget Strategies Committee tried to forecast the budget for FY07-FY10 and stated that if the Prop 2½ override was passed that there would be no override through FY10. Let’s hope that they were right!

In any event we need our town leaders (both town + schools) to help construct a 3-5 year strategic plan with a financial roadmap and not focus one year at a time.

Please take the time to vote in our poll on the subject of longer range fiscal planning. If you need assistance in signing in, please read our help page.

Posted by Jim Moran, LongmeadowBiz at 8:18 PM No comments: