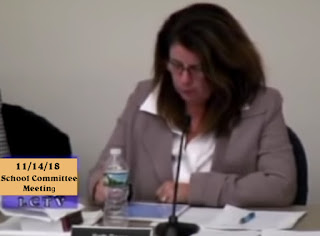 Below is a letter obtained via a Freedom of Information (FOI) request to the Town of Longmeadow.

This email letter was sent to Beth Baron, Chair of the Longmeadow School Committee on November 12- two days before the SC meeting on November 14 during which the SC voted to NOT renew Superintendent O'Shea's contract.


This letter was written by Randy Davis with cc to Amy Davis. The contents of the letter is a game plan proposal for the Chair to be used at the meeting on November 14 after the vote to NOT renew Superintendent O'Shea's contract.  The first paragraph strongly suggests that the SC Chair had previously communicated to Mr. Davis that the SC had already decided to not renew Dr. O'Shea's contract prior to the vote on November 14.

These two town residents (Randy and Amy Davis) who have lived in Longmeadow for ~ 3 years appear to consider themselves as self-appointed adjunct members of the School Committee.  They have been vocal critics of Longmeadow public education and have addressed the SC a number of times- advocating that our schools are not as good as advertised and need significant changes to become competitive with other school districts.  If you watch the two short video clips from SC meetings on July 24 and November 14, you can see that this FOI letter promotes their personal agenda.

In addition, while vocally proclaiming all types of issues within the Longmeadow Public Schools these individuals have a potential conflict of interest given their business as professional "life coaches" charging consulting fees of up to $150/hour (www.familylifesuccess.com).   During neither of the public appearances before the School Committee did they cite their business or any potential conflict of interest.

Question: What other communications took place between the Chair and these two individuals before the deciding vote to not renew Dr. O'Shea's contract on November 14?

Note: If text messaging was used by the Chair to conduct School Committee business, these messages are likely subject to FOI requests even if the public official used their own phone.

In light of this letter and with all of the controversy surrounding the Superintendent's contract renewal, the Chair should resign her position on the School Committee. 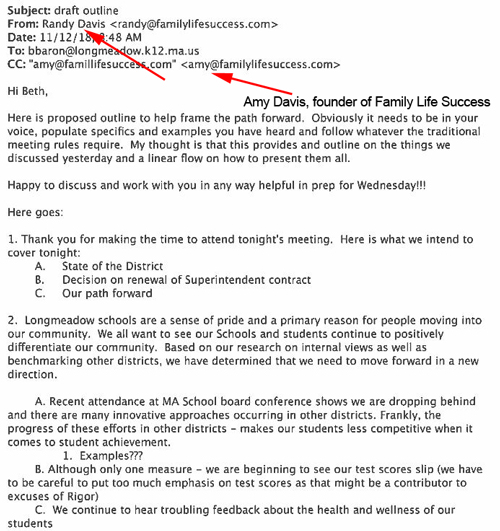 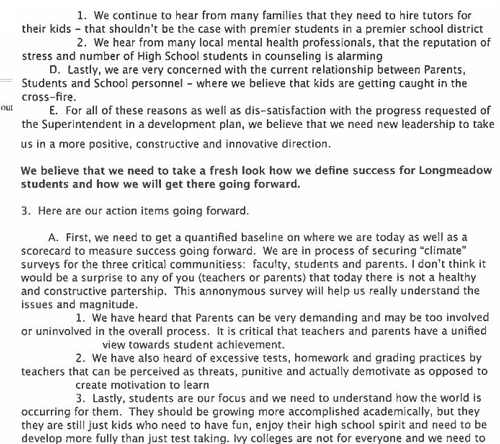 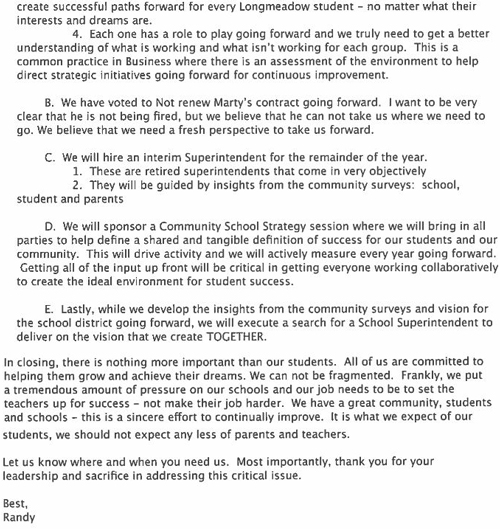 Randy Davis and his wife Amy shares their thoughts at the November 18, 2018 Longmeadow School Committee meeting about the renewal of Superintendent Marty O'Shea's contract.


Some earlier comments at Longmeadow School Committee meeting on July 24, 2018

Posted by Jim Moran, LongmeadowBiz at 5:13 PM No comments: