It's not the Tax Rate that is important! 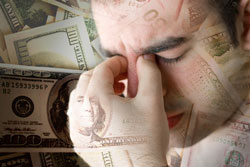 It's not the tax rate that takes a bit out of your wallet but it is the property tax bill that you receive every 3 months.

Media articles for the past couple of years have repeatedly used the headline,  "Longmeadow has the highest tax rate in the state of Massachusetts.".   Not surprisingly, many Longmeadow residents have voiced their concern.

It turns out that Longmeadow is further down the list of cities and towns with regard to average tax bill.

It is interesting to note that in FY2020 Longmeadow ranked #40 in the state for the average tax bill.  FY2021 tax bills for homeowners in Longmeadow ranged from $3500 --> $50,000 for property values ranging from $150,000 --> $2 million.  This is quite a wide range.  All town residents no matter their property value or their tax bill enjoy all of the benefits of living in Longmeadow.

The chart below (Figure 1) shows the change in average tax bill from FY2000 --> FY2021 including the various Proposition 2½ operational and debt exclusion overrides approved by town voters.  Since 2008, Longmeadow property taxes have increased an average of ~3.4%/year vs. a CPI inflation rate of 1.7%.  Employee benefits and in particular health care costs have increased much faster than CPI in recent years.  In addition, a portion of this rate of increase in property taxes was the construction of a new high school at a cost of $44 million to taxpayers.  Without the decision to build the new high school, property taxes would have increased an average of 3.0%/year (vs. 3.4%) during this period. 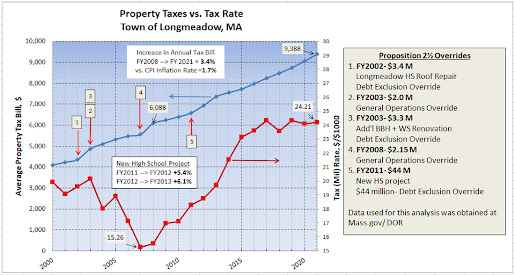 Let's take a look at Longmeadow's Tax Rates and Average Property Values from 1990 to the present (see Figure 2 below): 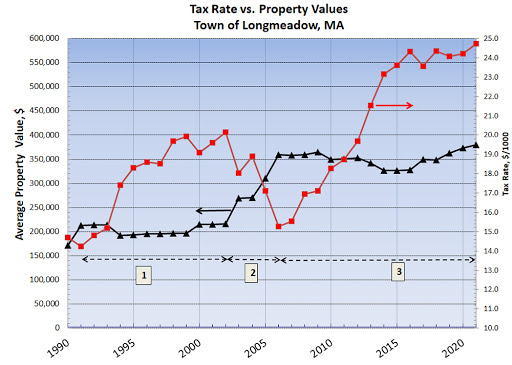 In Table II below there is a summary of Longmeadow Property Values and Tax Rates for the past 30 years for various time periods shown highlighted in Figure 2.  You can see that during periods with little or no appreciation of property values (1991 - 2002, 2006 - 2020), there was a significant increase in the corresponding tax rates.  Conversely, when there was a significant increase in property values (2002 - 2006), tax rates decreased significantly.  This is not a surprise given the math involved and shown in the above Property Tax calculation example.  You should also note that in the last 5 years (2016-2021) the tax rate has shown only a small increase with a moderate increase in average property values.

A major reason why Longmeadow is the perennial leader in tax rate in Massachusetts is the lack of appreciation in real estate property values as compared to the eastern part of the state.  Perhaps the construction of the East - West rail system from Springfield to Boston as championed by Senator Eric Lesser would increase the demand for housing in Western Massachusetts and increase Longmeadow's property values.

I believe that Longmeadow has done a good job for the past 30+ years in delivering a wide range of excellent town services from schools to public safety that our town residents have come to expect at a reasonable cost.